Let us look at some of the best places to visit in Varanasi.

To begin with, the center of action in Varanasi can be found at the Banaras ghats. It is a series of giant steps leading to the Ganges River.

Moreover, devotees believe Varanasi is where they can break free from the cycle of rebirth and unite with the divine upon death.

Touted as one of the holiest cities in India, it has loads of temples and ghats that host endless lines of pilgrims from all over the country.

In short, of course, it only adds to the holiness of the fact that river Ganga passes through Varanasi!

Here Is The List of best places to visit in Varanasi:

Firstly, people believe that this particular ghat is the oldest.

The lively atmosphere of the Dasaswamedh Ghat makes it one of the best places to visit in Varanasi.

You can spend hours people watching in this area during the day.

When it comes to famous places in Varanasi, the city’s southernmost main ghat regularly tops the list.

It draws hundreds of pilgrims every day, who come to worship Lord Shiva after rinsing in the Ganges River.

It is inside Banaras Hindu University.

In addition, the Birla family that has been a hugely successful group of entrepreneurs in India commissioned its construction.\

Every wall of it is covered in the utterings of Lord Krishna, when he recited the Bhagwad Gita.

On a list filled with temples, Alamgir mosque stands proudly as a representation of Muslims who have lived here for centuries.

In is famous for its incredible Islamic architecture. This mosque is unique in the fact that it lies on the banks of the Ganga.

To begin with, Hinduism certainly has a stronghold on Varanasi, but Buddhism has a major presence less than 12 kilometers away in the village of Sarnath.

The devout believe that the Buddha came to Dhamek Stupa to give his first sermon.

And, he showed the way to the eightfold path after attaining enlightenment.

In conclusion, the colossal temples & ghats and the other popular places to visit in Varanasi attract millions of tourists year after year.

In addition, it is not only a popular destination among the Indian travelers, foreigners love it too.

So, here, we have discussed some of the best places to visit in Varanasi. 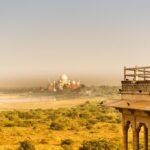 Places to Visit in Agra