Lakshadweep, formerly (1956–73) Laccadive, Minicoy, and Amindivi Islands, union territory of India. It is a group of some three dozen islands scattered over some 30,000 square miles (78,000 square km) of the Arabian Sea  off the southwestern coast of India. The principal islands in the territory are Minicoy and those in the Amindivi group..

Throughout the year, temperatures in Lakshadweep generally range from about 70 °F (about 20 °C) to nearly 90 °F (about 32 °C). Cyclones moving across the Arabian Sea rarely strike the islands. However, the winds and waves associated with them can alter the land features considerably.

The flora in the Union Territory of Lakshadweep includes Banana, Colocasia, Drumstick, bread-fruit, jack fruit and wild almond.  Coconut is the only crop of economic importance in Lakshadweep. These are found in different varieties such as Laccadive micro, Laccadive ordinary, green dwarf etc.Two different varieties of sea grass are seen adjacent to the beaches.

Among the most notable marine fauna are sharks, bonitos, tunas, snappers, and flying fish. Manta rays, crabs, turtles, and assorted gastropods are plentiful. The islands also are home to an array of water birds, such as teals, and gulls.

Most people of Lakshadweep are descendants of migrants from the Malabar Coast of southwest India, who had arrived in the islands sometime before the 7th century CE. Lakshadweep, vestiges of the religious and social orientation of the original Hindu migrants are evident in the existence of a matrilineal kinship system and caste like social groups but most of them belon to Islam.

Most of the Lakshadweep islanders speak Malayalam. However, some also speak Hindi.The population is concentrated mostly on the islands of Andrott, Kavaratti, Minicoy, and Amini.

Fishing also forms a major segment of the territory’s economy, with tuna as the primary catch. Many fishermen continue an ancient tradition of skilled navigation. Some still sail between the islands and the Indian mainland in distinctive craft called odam.

Lakshadweep Economy also gets its revenue from the tourism sector for the islands are fast emerging as a hot tourists destination. This has helped to bring in a lot of revenue for the economy sector.

Due to its isolation and scenic appeal, Lakshadweep was already known as a tourist attraction for Indians since 1974. This brings in significant revenue, which is likely to increase. Since such a small region cannot support industries, the government is actively promoting tourism as a means of income in Bangaram and Kadmat islands.Tourists flock to these islands throughout the year, except during the southwest mosoon months when seas are extremely rough.

Permits are needed to visit the territory. Government-sponsored tour packages are available.

Lakshadweep is connected to the Indian mainland by sea and by air. Kozhikode (formerly Calicut), on the coast of Kerla, is the nearest mainland seaport.Mainland and interisland helicopter services also are available. There are only a few miles of roads in Lakshadweep.

This group of islands is in the Arabian Sea to the West of Kerala. This is a small group of about 36 islands. Some of the islands are very small and have no population. Only ten islands have population. These islands form a separate Union Territory. These islands are of coral origin. Coral is the skeleton of tiny sea animal called Polyps. Over the years these skeletons have piled up and have formed hard surface. Most of the islands have back-waters or lagoons like those of the Malabar Coast. 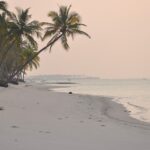